Design in Competition of a new residential building in Ostrava

The core of the architectural expression of this new building will surly be the façade to October 28 Street and Kostelní, with an emphasis on the pedestrian connection between Masaryk Square and the river. The character of this area is effectively a border; it oscillates between a historical core and the starkness of contemporary architecture close by. Both characters meet at our proposed building.

Biskupská Street has a larger scale and different character than usual, among the architecturally and historically diverse surrounding area.

Large austere areas close to both Sokolská Street and Biskupská Street are predetermined by the role of a public transportation link, that does not fit the desired architectural potential of October 28 Street and Kostelní. The core architectural expression of the proposed building must therefore be the façade, facing 28 October Street and Kostelní with the main aim being to emphasize the path for pedestrians between Masaryk Square and the river. The character of the area is effectively a border: it oscillates between a historical core and the starkness of contemporary architecture close by. Both characters meet at our proposed building.

Unlike the City Gate building, the plot in question is part of a city block. The block has varying degrees of height both at roofing level and across the shape of the street outline. This is usual in this area, and it is to a large extent shaped by the poetics of the historical center of Ostrava.

The main street façade onto Biskupská Street is simple and non-dazzling at least in the north-easterly orientation. A traditional orientation of the residential rooms within the flats on to the street is not suitable; not only because of the issue of sunlight, but also regarding contact with the genius loci of the historical core and to allow elimination of traffic noise.

At the crossing of 28th October Street and Biskupská Street there are three existing houses, each with a completely different style, when compared to each other. There is a narrow point of the plot being solved, and a requirement to keep the collector’s entrance object predetermined with the remaining architecture, in order to be different from other houses at the intersection. The new corner requires a bold, but sophisticated, expression.

The sun gives shape to the house and the now re-created block adds a fresh variety to the surrounding genius loci. The northeast façade corresponds to the large scale of Biskupská Street. The corner of 28. October Street is reminiscent of the facade of Kostelní Street.

THE SUN CREATES A BUILDING

Our insulation study shows that windows of residential rooms can be placed in Kostelní Street and in the courtyard from a height of about 7 m above the ground. In the courtyard, we place parking in stacked units, and above them is a garden with an attractive quiet character. The sloping side on the ground floor of the Moravian Gate building, a reference to the former church gate, receives a valuable new counterpart in the new building leading to the staircase to higher floors on Kostelní Street. This improves the sunnyness of the apartments overall.

The façades of Kostelní reflect the needs of the sun, adapting to the scale of the street front and creating a typical gradation towards the corner of Kostelní and Biskupská. Biskupská’s façade is shaped in a concise manner, in line with the current development. The houses on the corner of 28. October Street are stylishly non-uniform, the completed corner is in gentle reminiscence of the staircase sidecut into the façade of Kostelní Street. This connection emphasizes the importance of 28.October and Kostelní streets and effectively shortens the Biskupská’s façade.

The concept of a representative municipal building, which combines the historical and contemporary architecture of the city, projects the form of an axial grid of regularly spaced windows. The proportions of the grid to Biskupská correspond to neighboring present day houses, the grid to Kostelní narrows in line with smaller scale historical buildings. The lower floors, with shops and offices, have a more ordered & structured approach. In some places, the strictness of the grid is loosened by artistic intervention, referring to the characteristic picturesque diversity in the surroundings, based on the needs of the sun, the inner function, or the external context. The light plaster used on all other buildings in the block unites in mass-fragmentation.

On the side of the collector’s entrance building, there is omitted space for parking. This place can also be used to clear the courtyard, located on the 27/1 land plot between Biskupská and Zeyerova streets. For example, we can use this  as a means to broaden the network of pedestrian paths through parks and yards in direction of the city center. Plot 27/1 can also be accessed from the garage parking of the proposed building.

From the corner, leading through the recessed ground flow, the walkway widens into the lobby with an open staircase. The connection to the 28th October street pedestrian zone is clear and apparent, with the route peppered with new shops extended to Biskupská. The uncompromising end of the pedestrian zone, on the border of the intersection with the new building, disappears.

From the center, the house is served by a single staircase – the fibre that supports the community aspect of the building. Typical urban elements in the area are open vacant lots and vistas into the courtyards. An artfully open communication thread from the entrance to the garden is a reminder of this.

The whole building is served by a single staircase core in the middle of the layout. The open space, with a staircase between the entrance on Biskupská and the courtyard garden, is a reminder of the typical urban element of the neighborhood; open jetties and views of the courtyards. On the upper floors, the apartments are accessible from the open gallery. The apartments are oriented on both sides, with the possibility of direct ventilation. Family apartments in the southern tip are accessible by a footbridge, leading into the garden. The staircase, leading to the apartments on the upper floors, is protected for fire and safety reasons, and the fire escape route leads across the roof of the garage.

Rentable shops on the ground floor revive all street facades, and their size and rear facilities can be modified. In addition to the basic level of the pavement, each space has an attractive mezzanine floor.

Office spaces are designed to be in classic format, divided by individual offices, and also with coworking spaces that correspond to today’s trend of supporting socially beneficial business. The office space also has its own garden in the courtyard.

Layouts of one to three room flats are divided into a rich range, from family to individual, with supporting proximity to the neighborhood. We emphasize the community aspect of the building, supporting the growth of neighborhood community, where every household, apart from its apartment, has the opportunity to participate actively in the community – a community garden and open gallery.

The supporting structure of the building is monolithic reinforced concrete with lined facades, insulated with thermal insulation of plaster in the standard of a passive building. The building has no basement with the exception of underground parking and also technical and storage facilities. The installation of a controlled ventilation system with heat recovery can bring savings in heating and improve indoor air quality in winter or periods of smog. Further technological measures to improve the environmental performance of the building will be subject to design optimizations during the next phase of the project. Some active elements – solar panels, modern technologies etc. can also be added after the construction is completed, with sufficient space within these technical areas. 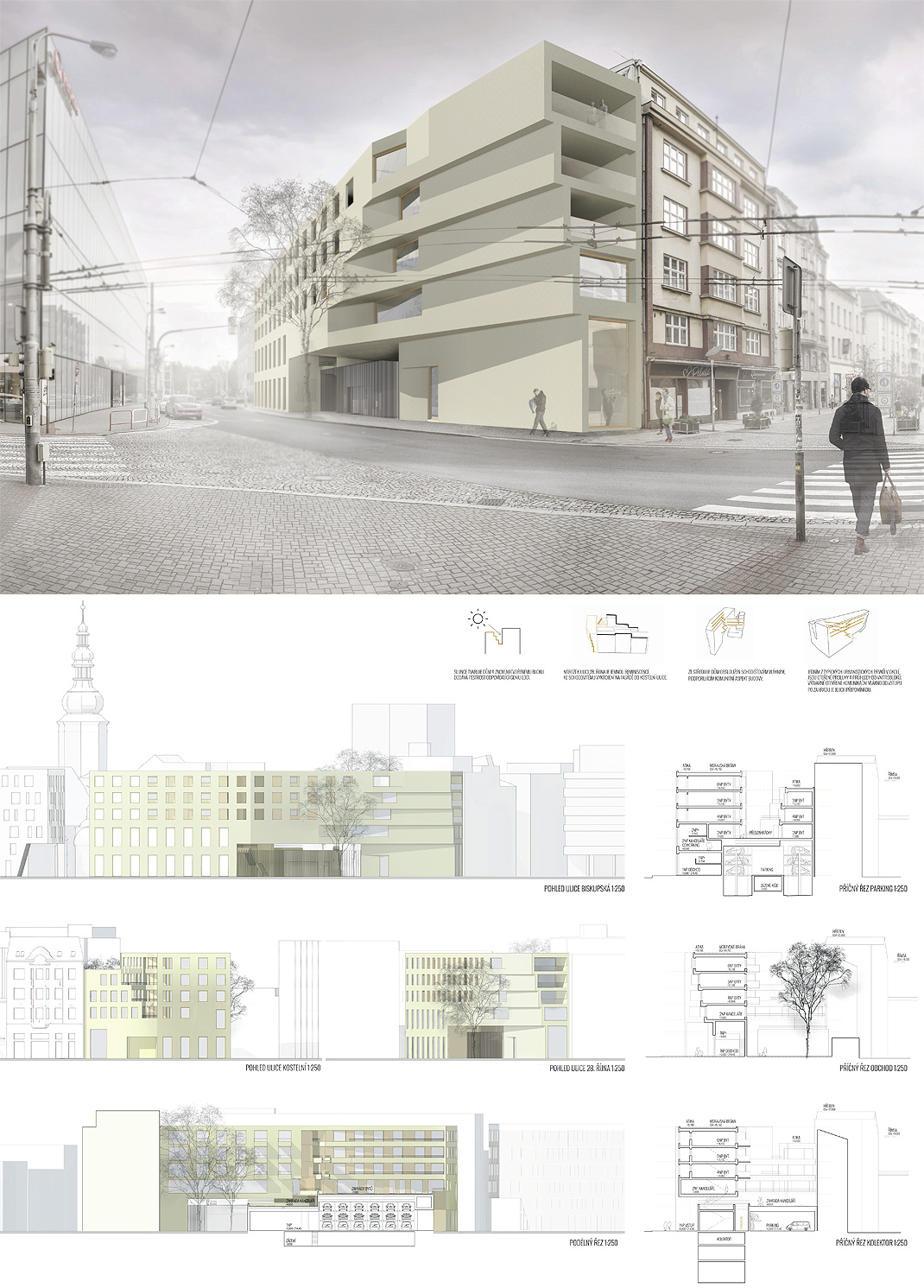 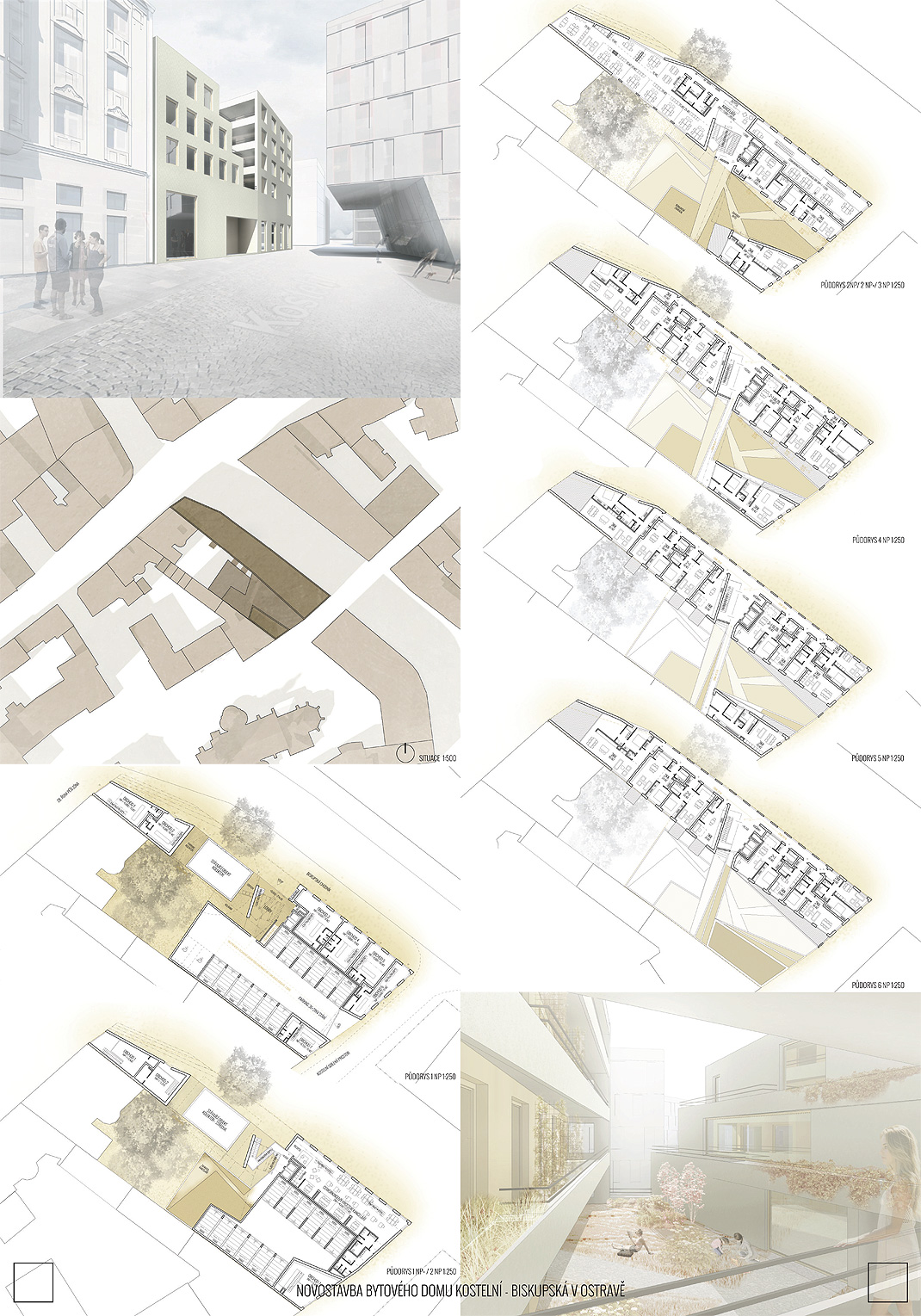