Design in competition of a home for the elderly

RESIDENTIAL COMPLEX “AT THE HOSPITAL”

The quality of the adjoining residential complex “U nemocnice/At the Hospital” from AP Atelier is dependent on the sympathetic layout of the multi-story ground floor and the clever combination of private and public spaces. The setting has the character of a garden city. The straightforward architectural expression of individual buildings is an expression of the idea that quality of life depends primarily on the quality of the arrangement of interior and exterior spaces. The orthogonal structure suggests a network of streets – an urban character.

The future boundary of the built-up town is defined by the polder: there will be a field above the polder. Contact with the open landscape will be an essential part of the life of a home for the elderly. The touches of urban and landscape character is a basic feature of the place.

The designed building consists of two parts. The eastern street leads to the city, the shape and scale is connected to the residential complex “U nemocnice / At the Hospital”. The garden part in the west of the plot faces the landscape and has a smaller scale, taking the shape of the terrain. The street part has a public, city parterre; the garden part is private and intimate. The urban landscape gently transitions into the open countryside.

The street part connects to the A5 apartment building and confirms the indicated street as the basic character of the locality. The increased ledging and the opening of the ground floor is a reaction to the characteristic elements of the U nemocnice ensemble: humility towards terrain and covered open spaces. The existing residential complex is another point of interest.

The shape of the garden part of the home responds to the shape of the terrain, with a smaller scale approaching the open landscape. The flat roof is covered with maintenance-free greenery. The house is inconspicuous and being in view from the surrounding hiking trails does not disturb the character of the landscape. The garden part gives a holistic variability in uniformity: although the arrangement of the rooms is the same throughout the home, the accommodation options, the goals of the views and the walking routes around the land are maximally variable.

Both parts of the building are connected by the ground floor, from the southern garden, covered under the rising terrain, and open from the north to the street level. The Northern Courtyard is open to the public, located on a potential pedestrian route between a green belt with a playground and a residential complex B. The interior and exterior of the ground floor is a multi-layered border: between public and private spaces, between residences and visitors, between city and countryside. The complex boundary enables many variants of communication – seniors can participate in the public life of the locality, to the extent according to their own needs.

The land area is divided into public and private areas. The private garden on the plot is separated from the public courtyard by its height. The garden is used for walks for seniors and offers easily accessible nearby destinations (a terrace, gazebo, garden with rocks and a water feature). The variable directions of the paths and the distance of the benches correspond to the need for an optimal distance between the rest areas. The plot of land is bypassed by a public pedestrian route along the polder dam. Our proposal adds a new barrier-free walking route that runs through the courtyard of the home and facilitates contact between seniors and residents. The anteroom of the home at Zdeňka Kopala Street is conceived as a shared space: traffic is slowed down, the road can be crossed safely in any place, the space is residential in style. The parking lot is divided into two separate parts so as not to give the impression of a large parking area. It is possible to enter the courtyard of the home from there.

The room with a living area of 20 m2 allows a single or double layout. The rooms have an asymmetrical floor plan so that roommates can be given varying degrees of privacy by simply moving the furniture. Each room has a semi-separate kitchenette with a small kitchen table and a seating area, which has the possibility of contact with the common area of the living unit. The level of privacy can be regulated and monitored inside and out with regard to the health or mood of the guests. The rooms also allow partners to live together.

The living units have 15 rooms, centered around a well-lit common area, which is under visual supervision from home staff. Due to its universal applicability, the common space is designed according to current trends in designing homes for clients with Alzheimer’s disease. The space reflects the declining need for solitude and offers characteristic, easy-to-remember places with the possibility of placing elements of reminiscence therapy. Several types of residences for mutual communication are complemented by an intimate nook for watching events. The main living area and assisted bathrooms are located in the center of the layout, in direct contact with the staff. In the street-orientated part there are three cells on three floors. The garden part is designed more loosely: it consists of one unit, divided into two floors. In the lower floor there is a staff study area, the upper floor is supervised only indirectly (two-story winter garden, staff rest room). The purpose of the division is to offer the possibility of more intimate, private housing for more independent seniors, for whom uniform accommodation with the more seriously ill would be demotivating. In case of future need to increase the capacity of the home, it is possible to increase both parts by 1 to 2 floors.

The ground floor contains the operational background of the building, radially distributed around the central living hall. The administrative operation is directly connected to the residential part of the hall, it allows a partial interconnection of operations: the meeting room and dining room of employees can be accessible to seniors, and seniors can get help at the reception or in the offices. Contact with an intimate water area is another reason to stay in the hall. The adjoining outdoor courtyard allows seniors and the public to meet, brought to the courtyard by a new walking route. The purpose of the hall is primarily to create a varied space for contact of residents with the administration of the building, with visits and with the outside world. This contact has many layers from intimate observation to sitting or walking together.
The doctor’s office is accessible from the interior of the home and from the street. The kitchen is oriented to the courtyard through a panoramic window and allows you to watch the water vessels and crafts sail by. A separate block consisting of workshop, garage and garden warehouse is accessible from the exterior, its operation is completely separate from the operation of the home. This block also houses waste and if it would be desirable from the city’s point of view, public containers for recycled waste can also be placed in the waste room. 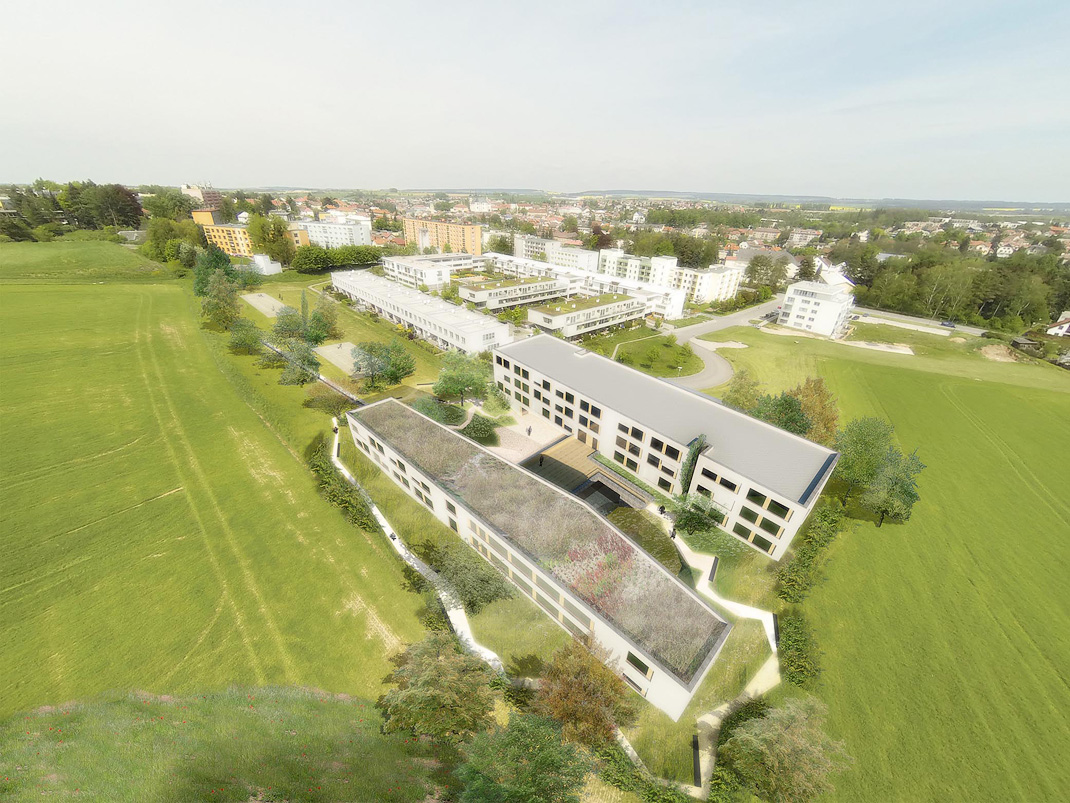 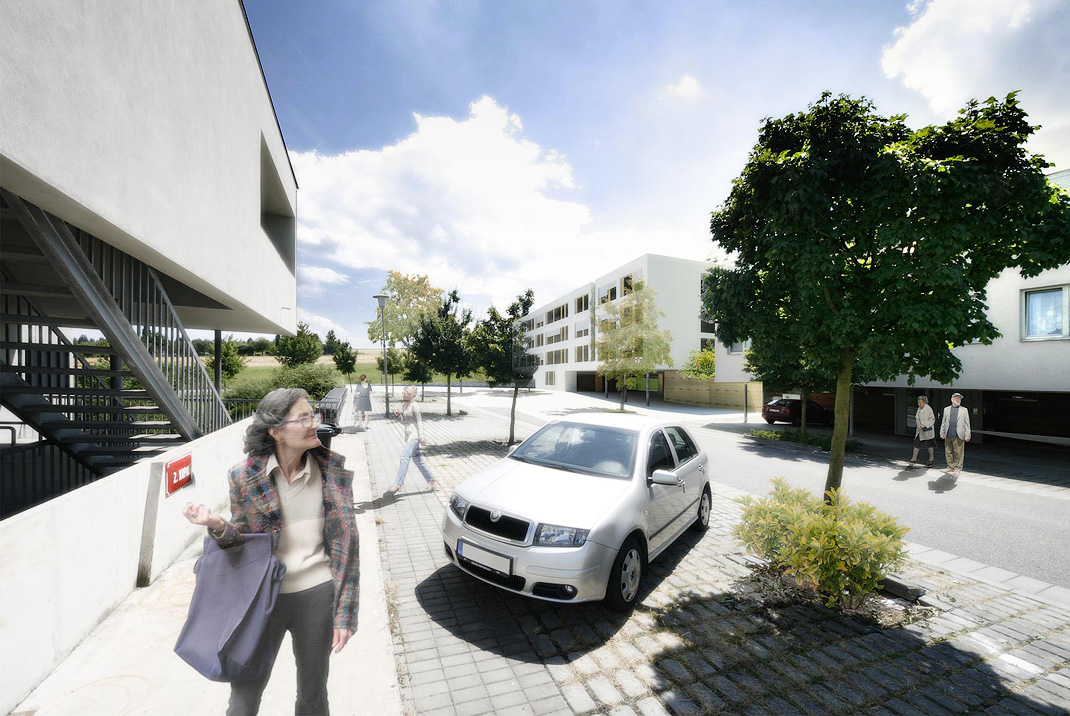 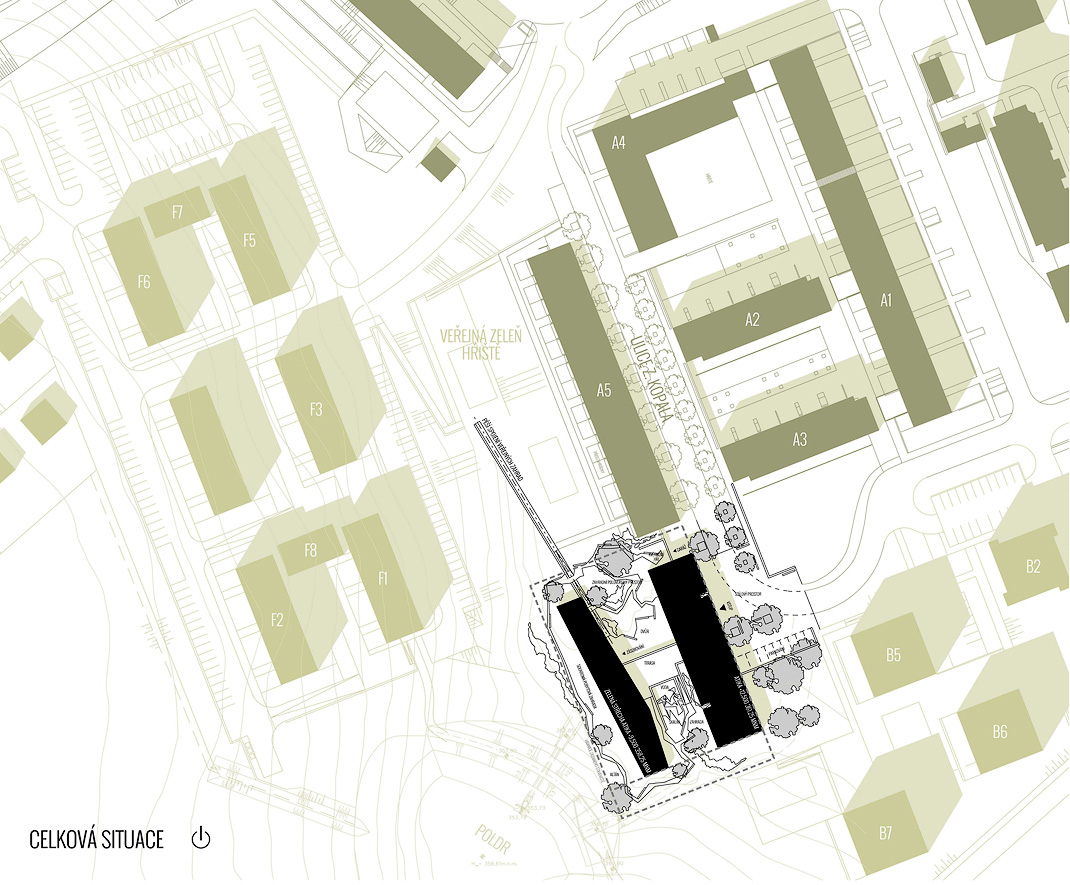 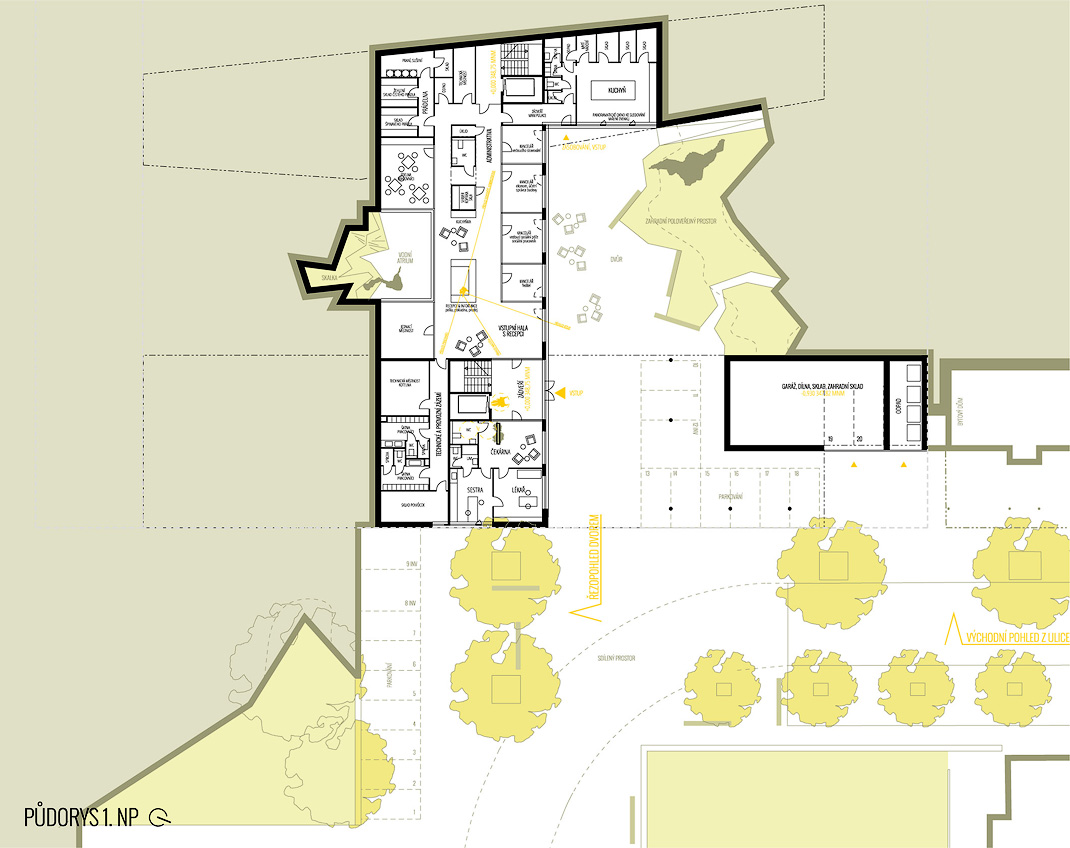 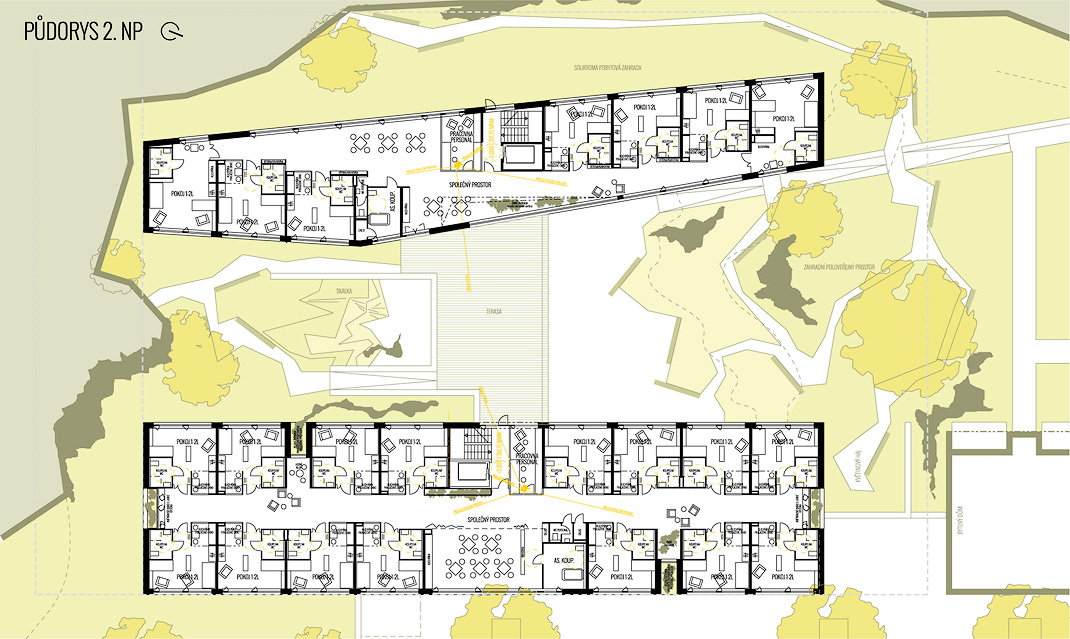 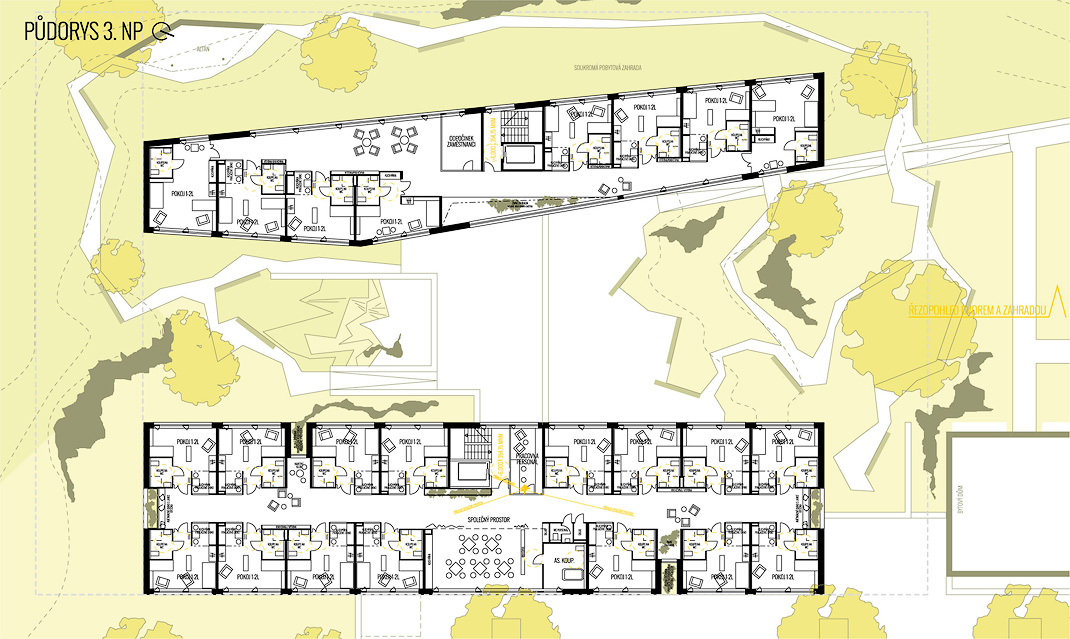 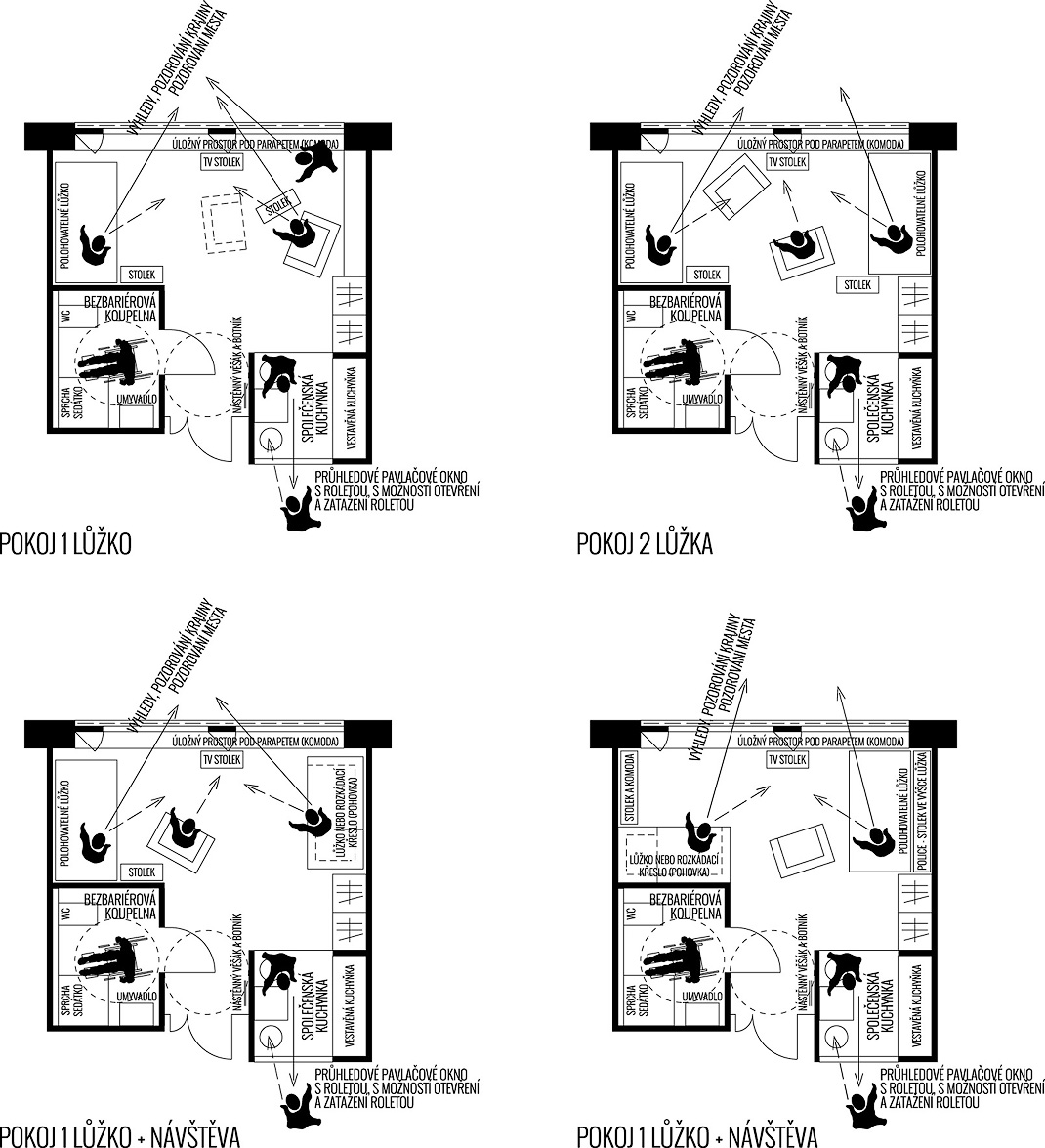